The action packed TV series of Game of Thrones is an awesome way to spend some time watching television, and you will need to have your favorite drink … and yes that means you will need coasters.

Each coaster features the house symbol and their saying:

Made from cork and each measure 4 inches x 4 inches, these will last a long time through many episodes of game of Thrones.

Read More About The Game of Thrones Coasters Set

Winter is Coming! That is the syaing for the House Stark and the direwolf is the symbol.

This is a pair of book ends that are based after the TV series Game of Thrones, on each bookend find a very magestic looking direwolf sitting up very straight and proper while on guard.

Made to be very durable and heavy these bookends are carved out of resin and then painted to look like stone, each bookend weighs 6 pounds and is 8 inches tall.

Read More About The Game of Thrones Stark Direwolf Bookends 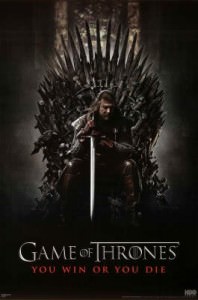 This poster features the HBO TV series advertisement for Game of Thrones, find the official text “GAME OF THRONES” along with “YOU WIN OR YOU DIE”, also there is a high quality image of the iron throne that all the families are fighting to rule and find Eddard Stark Lord of Winterfell and Warden of the North.

Measures 24 inches x 36 inches (60.96 x 91.44 cms) unframed and is available unframed or in many different style and colors of frames also check out the choices of print style.

Decorate your kingdom with Game of Thrones You Win or You Die Poster.

If you are a huge Game of Thrones fan then this t-shirt needs no introduction.

On this t-shirt you will find a grey direwolf head in immense detail, look at the fur scales and pointy teeth, also you will get the trademark saying for the House Stark of Winterfell “WINTER IS COMING ” and in smaller text you will see the text “Stark Game of Thrones”.

Made from 100% cotton to make a very soft t-shirt yet still durable, the t-shirt shown here is a babydoll style which means it is fitted to be tight, available in sizes Small to Xlarge.

Read More About The Game of Thrones House Stark T-Shirt