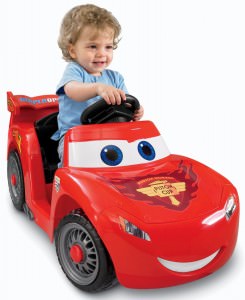 Vroom! Vroom! The Piston Cup race car Lightning McQueen is here and ready to take you for a ride.

This awesome ride on car features the star of the Disney Pixar Cars movies Lightning McQueen, it looks just like him an all red car with a smile and eyes on the front aswell as many decals like the Piston Cup logo on the front hood.

Included with this Power Wheels car is a 6-volt battery and charger and has three sound modes from the Disney movie Cars 2 giving you race car sounds.

Go for a spin in the Disney Cars Lightning McQueen Power Wheels Ride On Car.