Now you can get these Batman Travel Playing Cards that just are amazing for at home or on the go.

These Batman playing cards come in nice black travel case that has the famous Batman logo on it. And the cards itself are cool shaped and dark grey in color with in white the card info making the whole design look cool and on the back of each card you can find the Batman symbol.

Now you can play a game of cards in Batman style just like Batman would.

So now you can just take your Batman card game to friends all thanks to the travel case but you can use these playing cards at home too.

Now you can have your very own magic and games with a fun set that will turn heads check out this The Umbrella Academy playing cards.

This is a set of playing cards that are based after the many series of books and movies The Umbrella academy. On each card you will see a detailed image of characters seen along the way through The Umbrella Academy.

Characters like Ben the Kraken, The Monocle, Pogo the servant monkey, a Rumor card and many more. Along with the characters you will also see the classic card suit and number.

Made by Dark Horse this is a set of 52 playing cards with 2 jokers. They are a high quality card that will be durable and last you a long time.

Read More About The The Umbrella Academy Playing cards

With so many ways to love Harry Potter and the world of Witchcraft and Wizardry these playing cards are a very cool and unique gift or collectors item.

On this set of playing cards you find different images on each card based from the popular series of Harry Potter. Find cards like a King of Clubs that has an image of the Triwizard Cup and an Eight of Hearts with the Marauders Map.

These Officially licensed Harry Potter cards are very durable to last a long time from a trusted brand name of Aquarius. They measure 2.5 inches x 3.5 inches and have a unique linen type finish.

Time to play with these fun Scooby-Doo Playing Cards.

Playing cards are most times just way to boring but now you can have cards all themed around your favorite cartoon dog Scooby-Doo.

Like any real deck of playing cards also this deck has 52 cards with 52 different images and the back of the cards has an image of Scooby-Doo himself on it but on the front you can find all fun things besides the values of the cards.

A deck of card is easy to take so that you are always ready for a game of cards no matter where you are.

Now is the time for a game of cards and you should be using the Harry Potter Crests Playing Cards.

These playing cards do not have the normal spades, hearts and the others. These cards have the house crests and colors and on the back of the cards you can find the logo of Hogwarts.

So now you can play card games with your friends. Poker night will now have a Harry Potter theme all thanks to these cards.

Now is the time to put away your phone and actually play cards because it is way more fun when hanging out with friends.

Followers of the TV series Game of Thrones and those who like to play card games can fulfill both loves with this deck of playing cards based on the TV show.

Each suit in this deck of cards represents one of the houses in this show and has it’s sigil on the face of its numbered cards.

Clubs have the picture of the Direwolf from the House of Stark.

Spades have the picture of the Crowned Stag from the House of Baratheon.

Diamonds have the Golden Lion from the House of Lannister.

Hearts have the Three Headed Dragon from the House Targaryen.

Read More About The Game of Thrones Deck of Playing Cards

Are you an Adventure Time fan and love to play a good old game of cards?

Well, with these cool Adventure Time playing cards you will have the best of both worlds.

These awesome blue Adventure Time playing cards features all the characters like Finn, his best friend Jake, Marceline, Bubblegum Princess, Gunter and more. On all 52 cards shows them going on many adventures.

You will think your in the Adventure Time world with your friends while playing with the special deck of 52 cards. 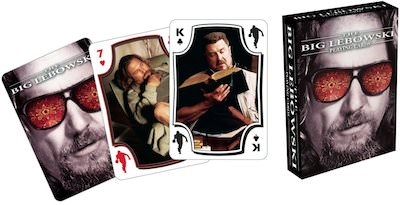 Fans of The Big Lebowski are gone enjoy this product.

If you like to play poker like the Dude or just a different card game, this set of playing card can be perfect for you.

Now is the time to start thinking of you next playing card and maybe then can be these The Big Lebowski Playing Cards. 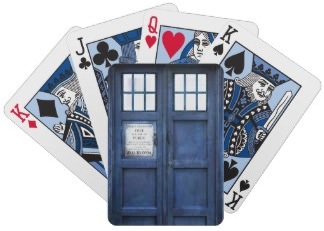 If you like the Doctor and a games of cards then you will like this set of Tardis playing cards.

The cards comes in a normal 52 card deck and also has 2 jokers. The back of the playing cards have a picture of the famous Police box called the Tardis and that is uesed by Doctor Who to travel in time and space.

As you can see even the cards have a blue color to make them match even better with the Tardis on the other side of the cards.

If you like a nice game of cards on a cold winter night then come see this Doctor Who Tardis Playing Cards. 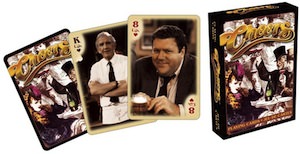 If you like a good game of cards and a drink then you are in luck.

This is an official set of Cheers playing cards.

52 images of you favorite Cheers characters can be found on this 30e aniversary edition.

And these playing cards of course have the official poker size so that you can play the game you love most while thinking back of your favorite TV show Cheers.