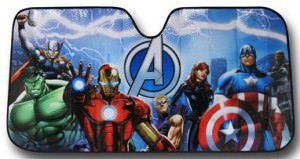 All of the Avengers heroes together and ready to help you keep the sun out of your vehicle and look good doing it.

This is a car sun shade that features amazing graphics and details, find in the center the official Avengers logo with many Avenger superheroes in their battle stance like Iron Man, Captain America, the Hulk, Thor  and many many more.

Made to be durable while looking super stylish this Avengers car sun shade measures 58 inches  by 27.5 inches and is the perfect addition to a Marvel Avengers collection.

Protect your car with the Marvel Avengers Group Car Sunshade. 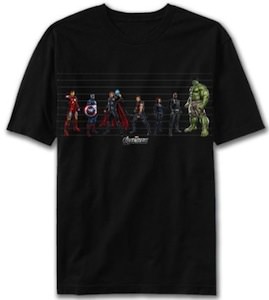 This t-shirt is fun.

On this t-shirt you see lines and in front of those lines you see the Avengers superhero’s so that you can see who is the biggest of them all.

You can see the size of Iron Man, Captain America, Thor, Hawkeye, Black Widow, Nick Fury and The Hulk and you guessed it right the Hulk is the biggest of then all.

This adult t-shirt is black and has besides the lineup also the Avengers logo on it and if comes in a range of adult sizes.

Show the world who is the tallest superhero by wearing this Marvel The Avengers Size Chart T-Shirt. 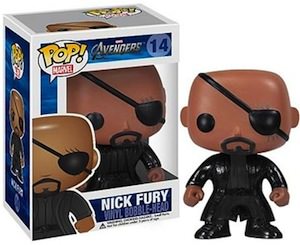 With a hight of 3.75″ Nick will watch you while at work and nodds his head at what ever you are doing.

A true Marvel collection can be without this Nick Fury bobblehead so maybe you should have a closer look at this Marvel The Avengers Nick Fury Bobblehead.