The Marvel Universe has many awesome super heroes and villains. Phoenix is one cool and powerful woman, if you love her have a look at this costume catsuit perfect for Halloween, costume parties or anytime you like.

This is an all red jumpsuit with gold large attached belt, boot covers and gloves, All of the red and gold is a shiny metallic transforming you into a live Marvel Comics comic book character of Phoenix.

The Phoenix costume is made to fit sleek and sexy, available in a wide selection of women’s sizes that range from Small to 2XL. With the perfect spandex material and a shiny metallic finish the costume catsuit will be comfortable while lasting you a long time.

Marvel Comics have many awesome characters, superheroes and villains. If you love Emma Grace Frost then this is one tank dress you may want to add to your closet.

As seen in many of the Marvel Comics X-Men series you see Emma Frost in an icy white suit, this tank dress looks just like her super hero suit with a printed on “X” a sign of X-Men and printed on lace up ties.

The Marvel Comics X-Men Emma Frost tunic tank dress is available in a wide variety of women’s junior fitted sizes that range from Small to XL and is made to have the perfect amount of comfort and stretch from 95% Cotton and 5% Spandex. 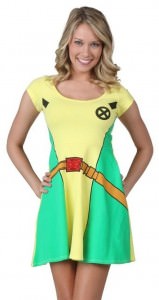 After a small attempt of being a villain Rogue quickly decided that in 1981 she will become a superhero with her superhuman abilities, now you can look like a super cute Rogue with this adorable dress.

This skater style dress is based after the superhero suit that the Marvel Comics character Rogue is often wearing, find a pale yellow and green design, a printed brown belt with red buckle along with the Rogue symbol is an “X” in a circle.

Available in a wide selection of women’s sizes that range from Small to XL and it will be durable and comfortable, it is made from 95% cotton and 5% spandex giving this skater dress the perfect amount of stretch. 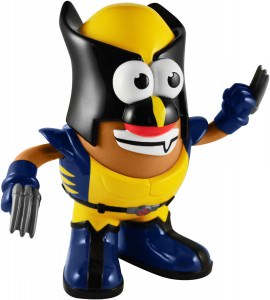 Featured on this Wolverine Mr. Potato Head is the classic Wolverine superhero outfit of yellow and navy blue, as well as navy blue boots, very cool Wolverine helmet and of course the arms come with the unmistakable Wolverine claws.

Collectors you are also in luck, the Wolverine Mr. Potato Head also comes in a collector’s window display box to keep him in mint condition. 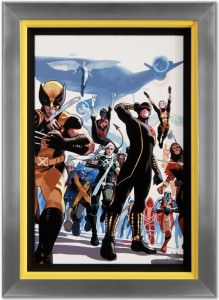 Hand signed by Stan Lee ……. Limited Edition Numbered 1 of 4.  Do I even need to say anymore.

It is now time to own a little bit of comic book history with this limited edition print hand signed by the amazing Stan Lee that features Wolverine, Cyclops, and Rogue standing front and center with many other great X-Men characters in the background.

Printed on a durable giclee on canvas and is in a custom frame that is acid free to ensure your Stan Lee hand signed X-Men Legacy Annual #1 – Storm and Gambit print stays preserved.

Measures 28″ x 39″ with frame and approximately 22″ x 33″ out of frame, and of course the X-Men Legacy Annual #1 – Storm and Gambit includes a certificate of authenticity, you will Marvel at the quality and detail this print has.

Hurry and get yours before it is gone! Stan Lee hand signed X-Men Legacy Annual #1 – Storm and Gambit 1.