If you like Carl from The Walking Dead then you need to check out this Carl Grimes portrait t-shirt.

One thing is sure if Carl is your The Walking Dead favorite then you will be hating Negan as he made sure that Carl now only has one eye to look out of.

On this t-shirt, you can see a portrait of Carl while wearing the cowboy hat and a bandage on his dead eye.

You can get this The Walking Dead t-shirt in styles for men and women and it is available in many colors and in sizes Small – 6XL.

Each pair of socks has a different color and a different character on them. You will have socks with Daryl, Carl, Rick,Glenn, and Michonne. And wearing nonmatching socks is popular so mix it up a bit going to work or school with one foot wearing Glenn and the other foot having Daryl on it.

On the bottom of the socks, it says “AMC The Walking Dead” and that makes it all complete.

Read More About The 5 Pairs Of The Walking Dead Socks

Remember Carl Grimes being young and inexperienced? this The Walking Dead t-shirt is all about that.

On the white t-shirt you can see a picture of a really young Carl and he is wearing his dad’s hat and below the image it says in big letters “Stay In The House Carl” just like it happened many times in the hit TV series. The shirt also has The Walking Dead logo to make it even better.

It does not matter if you are a man or women this t-shirt will look stunning on you and yes of course it comes in different sizes as we want it to fit your perfectly. 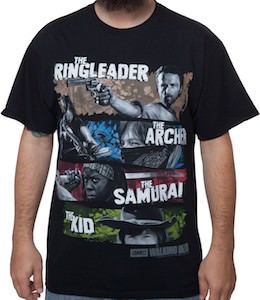 This Walking Dead T-Shirt is black and shows for of the characters that are a mayor part of the TV show.

Each character has it’s own banner on the shirt in a different color making this shirt pretty neat and unique. 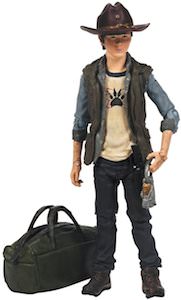 There we have Carl Grimes the son of Rick and this time Carl is an action figure made by McFarlane Toys.

The action figure is made from a 3D scan of the actor who plays Carl Grimes and is based on season 4.

This The Walking Dead figure has all the details we expect including the sherifs hat he got from his dad.
And Carl also caries the key of the jail, knife and the prisons medical bag.

The Carl action figure is about 5″ tall and has 22 points of articulation.

If you want to start a small Walkers killing army then why not start with this The Walking Dead Carl Grimes Action Figure.