Now you can have a hard boiled egg that looks like Darth Vader!

Yes just put a freshly boiled egg into this egg mold and it will be transformed into the Star Wars bad guy Darth Vader.

By putting the warm egg and letting it cool down the egg will shape in the shaped of the mold making it look like the famous mask of Darth Vader.

Just imagine an Easter breakfast with Star Wars eggs or just to add to your lunch for school or work.

No longer do we need boring oval eggs because now they can look like Darth Vader.

What do Halloween and Easter have in common?

Both holidays often have candy collection in common and that is why this candy pail is perfect.

The black pail has the Jurassic World logo on one side and on the other side it shows more dinosaurs and the text “Welcome to Jurassic World”.

Beside Easter and Halloween kids can find a use for this pail as it can hold so many things like their dino collection or maybe the sandbox toys.

Get your child ready for trick or treat and egg hunts with a decent candy pail like this.

And yes this pail of course fits nice with a Jurassic World Halloween costume as well.

And Carlos wants you to tweet this and then you can, of course, wonder if he means twitter or just use his chicken voice and say tweet.

So in this yellow shirt, there is a big picture of Carlos and the saying below him says “Tweet This” and it even has the Hop Easter egg logo.

This adult sized t-shirt comes in sizes Small – 2XL and is made from 100% cotton so no Easter bunnies of chicks were hurt in the production of this Hop t-shirt.

If you need a fun t-shirt for Easter or any other day of the year then come get this shirt.

Kids love Easter because then the chocolate bunnies and eggs appear all delivered by the Easter bunny.

This t-shirt is all about Easter but then more in the sense of the movie Hop.

On this white kids t-shirt, you can see a big row of chocolate bunnies with in the middle E.B. the many characters of the movie and there is also Carlos the Easter chick dancing around.

And to end it all there is the Hop logo witch, of course, is egg-shaped and below that the text “Candy, Chicks and Rock ‘N’ Roll”.

This 100% cotton t-shirt is great for Easter and comes in many kids sizes. 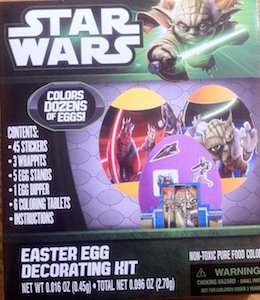 Easter will be so much more fun if you have Star Wars easter eggs.

And this egg decoration kit can help you getting the perfect Star Wars eggs.

The kit has 6 coloring tablets to get the right color for the eggs then there are 3 wraps and 45 stickers and there are also 5 egg stands and a egg dipper so basically everything you need to get Star Wars Easter eggs.

Your Easter breakfast will be so much fun or just imagine searching for Star Wars Easter eggs in the yard.

Beside for Easter you can use also use this kit for other events like birthday’s or Star Wars movie night.

Come and have a closer look at this Star Wars Egg Decoration Kit. 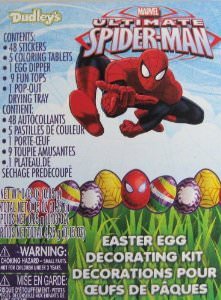 Easter is the time of year that eggs are the item to look for.

If you are crazy about Spider-Man then of course you would love to decorate some eggs in Spider-Man style.
And we got you covered as this Easter egg decorating kit has everything you need to make the perfect Spider-Man eggs.

The kit has colouring tablets to make you eggs a fun color and many stickers and even some fun egg tops to make those eggs look like a true superhero egg.

Easter will be better then ever because now you easter breakfast can have some fun Spider-Man eggs made with this Spider-Man Easter Egg Decoration Kit. 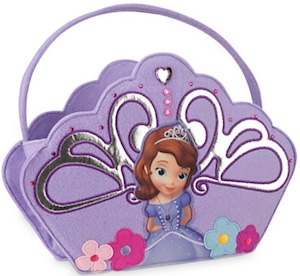 It does not matter if you go trick or treating, Easter egg hunting or just need a princess style bag to play with this Sofia the First bag is the one you need.

The purple fabric bag has amazing fun details you can find glitter, flowers and of course Sofia the First.

The reinforced handle is made for children’s hands and will survive many playdate, parties and more.

Great as treat bag this Sofia the First bag will be your kids favorite toy.

And besides all the other things you can do with it this trick or treat bag is also great as part of you Halloween costume.

Come and make your kid happy with this Sofia the First Trick Or Treat Bag. 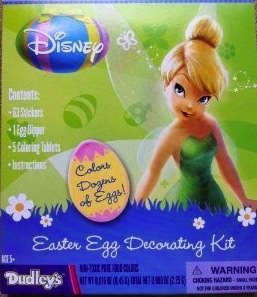 What do we do with Easter besides waiting for the Easter bunny?

Yes we decorate eggs. And now you can decorate your Easter eggs the Tinker Bell way.

This Tinker Bell Easter egg decorating kit comes with 5 coloring tablets, 1 egg dipper and tons of stickers to put on the eggs after they got a color.

If you like Fairies and Tinker Bell then come check out this Tinker Bell Easter Egg Decorating Kit. 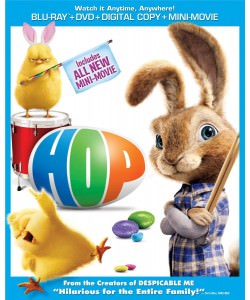 Your favorite animated Easter bunny is ready to show you a rock’in good time in the cool movie HOP, this is a hilarious comedy about a young bunny named E.B. who is next in line to be the Easter bunny but E.B. has other plans so he sets out for hollywood to embark on his dream of being a rock star drummer.

With the introduction of other awsome characters like Fred O’Hare and the chick named Carlos the plot thickens and Carlos is trying to take over Easter, with the help of Fred O’Hare can E.B. stop Carlos from his evil plan.

HOP will be a family favorite for sure and with this combo pack that includes a Blu-ray, DVD and Digital copy you will be able to watch it anywhere. 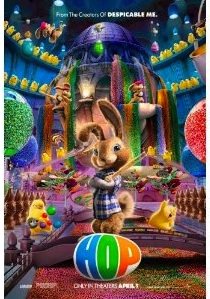 If you like the Easter bunny and movies then you will love the movie Hop.

And now you can decorate your room with this nice movie poster from the Hop movie.

The poster is 27 x 40 inch and that is the perfec size for this movie poster.

Get ready for the Easter bunny with this Hop Movie Poster.