Now you can get this Winnie the Pooh And Eeyore Picture Holder.

This is a set of two holders one looks like Winnie the Pooh and they other one looks Eeyore and each are separate so that you can place them where ever you want in your home or the office.

From the head of the figures there is a metal wire coming with a clip on top and that clip is great for holding pictures and notes so that you can see them when ever you want.

Positive notes from a friend a picture of a family member or even the dog these Winnie the Pooh holders are just fun and versatile.

Read More About The Winnie the Pooh And Eeyore Picture Holder

The classic tales of Winnie The Pooh have many great friendly characters. One of the Disney favorites is Eeyore a very soft spoken and caring friend to Winnie The Pooh.

This is a pair of onesie pajamas that transform you into Disney’s Eeyore character, wear it for bed time or lounge around. Maybe even throw it on for a dress up party or as a costume for Halloween.

Featuring a hood that when is on will look just like Eeyore’s head with floppy ears and tuffs of hair. The body has a front zipper and is all purple with a beige belly.

Made from a very durable, warm and super soft plush material. This one piece pajama is available in a wide variety of women’s sizes that range from Small to XL.

If you like Eeyore and are looking for a fun lip balm then you should check out this Tsum Tsum Eeyore lip gloss.

The lip gloss is made by Lip Smacker and has a dome shape lip balm inside.

The lip balm is holder is shaped like Eeyore as a Tsum Tsum and just like the other Tsum Tsum products this one is stackable too so that you can start collecting all the Tsum Tsum lip balms and you will never have dry lips again.

Eeyore is always cute and a lip gloss like this makes him even more adorable.

If you like Eeyore the donkey friend fromWinnie the Pooh then this pillow would be perfect for you.

The throw pillow has a light blue background and on top of that you find Eeyore and he looks like it’s happy self with big droopy eyes. But we all know that Eeyore keeps things in the negative so I think he is pretty happy today. 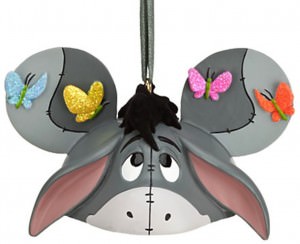 One of the most popular characters from the Winnie-the-Pooh series is Eeyore and now you can have him this holiday season.

Hang this beautiful Eeyore ornament on your tree this year and Eeyore will say, “Thanks for noticing’ me” “We can look for the North Pole”.

This cute Disney Ear Hat ornament is fully sculpted resin in grey, white and pink with four glittery butterflies in orange, blue, yellow and pink sitting on his ears. At least they didn’t land on his house and knock it down!

Eeyore’s black mane and tail are flocked and there is a pink bow on the end of his tail.

If you look on the back of one of Eeyore’s ears, you will see that he tried to print his name.

Don’t be gloomy, get this Disney Eeyore Ear Hat Ornament.

Looking for a perfect lounge suit that you can sleep in and a Halloween costume?

How about this Eeyore Kigurumi pajama?

It’s a one size fit most costume that makes you look so much like Winnie the Pooh’s friend Eeyore.

The costume pajama makes you look like Eeyore complete with a tail and a fun face with fun Eeyore ears. And this costume has easy buttons on the front so that you don’t need help when you want to wear it.

Halloween party of day on the couch this costume is just perfect and so cute. 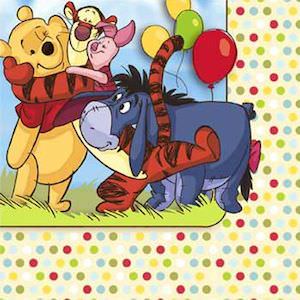 Are you planning a Winnie the Pooh theme birthday party or baby shower?

Well you will defiantly need to start with getting these cute Pooh party napkins because every party needs napkins to wipe there hands after enjoying all the party goodies.

These cute Winnie the Pooh napkins features Pooh receiving a big group hug from is good friends Tigger, Piglet, and Eeyore with some balloons on 3/4 of the napkin. The rest of the napkin is covered in colourful polka a dot.

Your kids will have lots of fun pretending to party with Pooh and friends.

Start you planning now and begin with these Winnie the Pooh Paper Party Napkins. 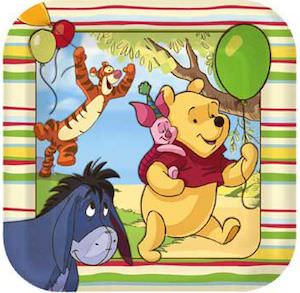 Winnie The Pooh and friends are looking for a party?

Let Pooh bear, Tigger, Piglet, and Eeyore be a part of your party with these special Pooh and friends paper plates.

These colorful party paper plates features a picture of Winnie the Pooh, Tigger, Eeyore and Piglet with balloons happily on there way to your party.

The paper plates come in a pack of 8 plates and are 9 inches square in size. Perfect for all your yummy favourite party foods like hot dogs, chips, pizza or cake.

Your kids will have so much fun eating off these fun Pooh party plates.

Make your party into a Pooh theme party and start with these Winnie The Pooh Paper Plates. 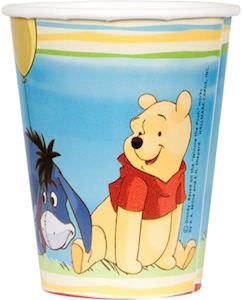 Are you planning a Winnie The Pooh themed party? If so you will need these Pooh and friends party cups to drink from.

These party cups feature’s Pooh Bear, Tigger, Piglet and Eeyore carrying a balloon around his neck happily going to a party of there own.

They come in a pack of 8 and will hold 9 ounces of your most favourite party beverage.

When the kids drink from these Pooh paper cups they will pretend to go on adventures like Pooh and his friends go on.

Your kids will have lots of fun drinking from these Winnie The Pooh And Friends Party Cups.

Eeyore is one sad donkey and no matter how hard Winnie the Pooh and his friends try he does not seem to become any happier.

But it seems like Eeyore has fun while going for a ride in a car.

As you can see on this car window sticker Eeyore seem to be waving at people that look at him.

And the extra fun part is that you can have this Eeyore window decal for you car.

The decal is white without any background and that makes it fit so nicely on a car window and just imagine how much fun it is for people behind you at the lights.