This women’s tank top is available in sizes Small – XL and they are all made from 95% Polyester and 5% spandex.

On the tank top you can find the shirt that Jessie the Cowgirl from Toy Story wears and yes both the front and the back of her outfit are here only there are no long sleeves as this is a tank top.

A shirt like this is great for wearing any day of the year but it would work great for Halloween too and maybe even a rodeo.

I am sure that this shirt will look amazing with you and with a pair of jeans it will be a total cowgirl outfit.

Kids and adults need a nice water bottle to stay hydrated without the nasty plastic bottles.

And now there is the Toy Story water bottle that has cowgirl Jessie on it.

This 24 oz water bottles is perfect for school, work, workout and a fun trip.

And we should you a purple color but you can actually choose from 11 fun colors.

Made from stainless steel this Jessie water bottles is crack and spill proof and 100% BPA free.

And as this bottles has a nice loop on the lid it will be easy to hang it on your bag so that you never have to loose it. 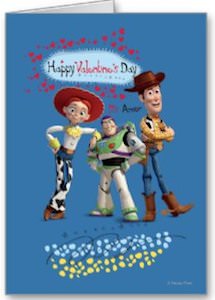 If so then this is the Valentine’s day card to get.

On this blue card you can see Jessie Fashion Doll, Buzz Lightyear and Woody and the text “Happy Valentine’s Day Mi Amor”.

This Toy Story greeting card is blank on the inside leaving all the space for a fun text or maybe a drawing.
And yes this Valentine’s day card comes with an envelope so that you are all set to go.

Let’s Toy Story bring the love to your Valentine.
So come and get your own Toy Story Mi Amor Valentine’s Day Card. 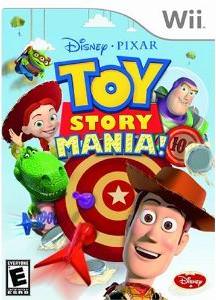 The crazy high flying, horse riding, target shooting action of the hit animated series of movies Toy Story from Disney / Pixar  is ready for you to get in the action with your Nintendo Wii video game console.

This is Toy Story Mania! a very cool video game that is based from the awesome Toy Story movies and the 4D Toy Story Mania attraction at Disneyland Resort and Walt Disney World Resort.

In the game you will compete in 10 fast paced shooting galleries, have a chance at 30 different mini games and try to collect easter eggs to enable you to get the hidden game features and items.

Exclusively made for the Nintendo Wii Video game system you will find all of your favorite characters like Woody, Buzz Lightyear, Jessie,  Rex, Bullseye and many many more.

Suit up and get in the action with the Toy Story Mania Nintendo Wii Video Game.

This will make you kids brush their teeth!

On the tube you find Woody, Jessie and Buzz  all incuraging you to brush your teeth.

Buzz Lightyear and Jessie from the hit animated series of movies Toy Story are ready to dress up with you.

These are very sexy tank dresses that have details from each character on them.

Buzz Lightyear dress has the fun green colors and chest armour and controll board all printed on it.

The second dress resembles an outfit that Jessie wears, her brown belt with big buckle and country design are printed on the dress.

There is the cleaner of our diserted planet Wall-E the cute robot that was abanded just to clean out mess.

But now you can have your own clean Wall-E plush and he loves to cuddle and  look all pretty in your room.

A robot like Wall-E should be part of your collection of plush robots so do not wait come and get one and they come in a 10 and 15 inch version so that you can get the perfect size Robot.

Read More About The Wall-E Plush 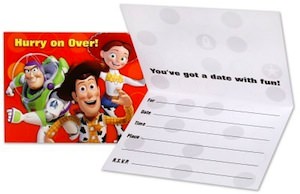 Are you gone have a party?

How do you invite your friends?

If you like Toy Story then this pack of Toy Story party invitations will be perfect.

You can use them for all your parties and yes of course also birthday parties.

On the front of the card you find you Toy Story friends Woody, Buzz Lightyear and Jessie.
And on the inside is plenty of room for all your party details.

These Toy Story invitations comes in a set of 8 and include envelops.

Get your party organized with this set of Toy Story Party Invitations.

Toy Story is already cool enogh, so how could you make it even better?

I know, add LEGO into the mix. This is an awsome idea!

The Toy Story western train chase, LEGO style is a great way to re-enact some of your favorite scenes from the hit animated movies Toy Story 1, 2 and 3. This is a huge 584 peice set that includes figures of Woody, Buzz, Jessie, Bullseye, Rex, and Hamm as “Evil Doctor Porkchop”, and the train has  a locomotive, 3 boxcars, trap doors, and moving wheels. 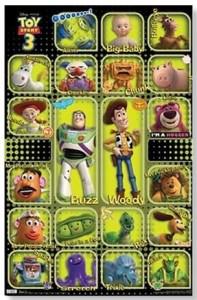 Disney/Pixar animated series of movies Toy Story has had many memorable characters. This Toy Story 3 poster has alot of the crazy, cool charcters seen throughout the movie Toy Story 3. This looks awsome on the wall or a door and is a great way to quickly check out your favorites from Toy Story 3.

Check out your Toy Story 3 Poster.